Picnic on the Park Recap - An Inside Look 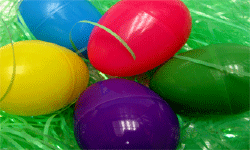 It started with a phone call.

“Carla, I’ve always wanted to have an Easter Egg hunt for the whole community.”  The voice on the other end of the line was Dawn Bajalieh, the Realtor with RE/MAX Associates NE who sold us our home a year and a half ago.  We felt lucky that we found Dawn after being relocated to Houston, not only did she do a great job for us during the sale of our home (and as a former Realtor myself I had pretty high standards), but she became our “go-to” person when we needed information as we were settling into Kingwood.

Since then, we have worked on some projects together.  She was a sponsor for the newsletter that I do for Mothers of Young Children.  I helped her husband, Eddie, put together promotional materials for his pool construction company, All Star Pools.

“That’s a great idea, Dawn.”  Since this was the beginning of March and as Easter was just around the corner, I thought that this was an idea she wanted to work on for next year.

“I talked with Cindee at Houston Title and if the event benefits a charity, they can help sponsor it.”


“I want to have a planning meeting next Tuesday.”

Next Tuesday was March 9th.  The day that she wanted to have it was April 10th, to be exact, 32 days before the event.  But if anyone could do it, Dawn could.  She has lived in Kingwood for over 20 years, had several businesses before becoming a Realtor, has coached, volunteered, and sponsored who knows what all, and organized the Woodland Hills Elementary Fall Festival for several years.  She knows just about everyone and people close to her know that when she is rolling on a project, they had better be prepared to volunteer or write a check, preferably both.


I wasn’t sure how much help I would be.  I’ve volunteered at events; however, I hadn’t been responsible for planning one.  As we had only lived in Kingwood for not quite two years, my network was pretty much limited to people I had met through Mothers of Young Children.  But I agreed to sign on and help in whatever capacity I could.


But I wasn’t about ready to walk into this whirlwind of a project without pulling at least one or two other people with me.  So I called my friend, Anna Campbell, another member of Mothers of Young Children and half of the two person committee that had organized the group’s Holiday Market the previous November.  Anna has a printing business, Humble Print and Fold.

The Kingwood Connection
is a publication of: